This longer version will be remastered with a new soundtrack soon!

Expanded Cinema show at Made in NY Media Center by IFP 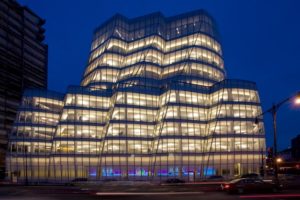 A visual love letter to space exploration, and the engrossing beauty of the cosmos.  A voyage beyond our solar neighborhood into the unknown and a panorama of views from alien worlds set beneath alien skies.

What does it feel like to be the first human to see a sunrise on an untouched, unexplored world?

What feelings do you want to provoke / evoke in the audience? 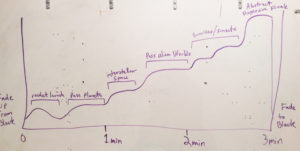 The overall shape is a regular step up to the finale.
There are six general sections:

Leaving earth, passing the known planets, travelling through interstellar space, arriving at a distant solar system, sunrise/sunset/star-rise, decay into abstract eye candy.  Each section will be similar in length but the speed of the animation will increase towards the end.  Each section will blend into the next whereas the latter part will be more sudden and jumpy.
The climax is the abstract animation that happens towards the end; it lasts about twenty seconds.
The punchline is that each world has it’s own fantastic horizons and vistas.

What technologies are you exploring?

How to make the visuals work with soundtrack.

What questions do you have?

Does the visual story make sense.

What are your influences?

Out of the Cradle: Exploring the Frontiers Beyond Earth by Ron Miller, Interstellar by Christopher Nolan, Blade Runner and Prometheus by Ridley Scott, 2001 a Space Odyssey by Stanley Kubrick.

What is your “visual language?”

Any visuals from your 100 images assignment you’re going to build upon?

The stars, space, and planetary stuff.

What raw emotions do you want to insert into the roller coaster ride?  Wonder, exhilaration, delight, tranquility.

One hundred images to test on the big screen.  Here is a sample. 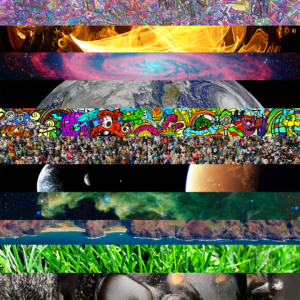 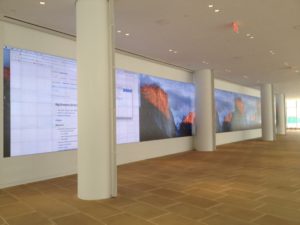 There is quite a bit of background processes that must be set in motion to play a video file on the screen.  I was able to mock up a quick test of the rendering parameters with a 3D model I made in Blender 3D.  Very exciting to have something up on the screen to see what it looks like on day one!  Thanks Mimi!