Data transmission on arduino over rx tx does not work on wires longer than 15 feet; transmission will not work.  The wires work as antennas and pick up interference that is higher than the signal.  Inductance distorts square waves.  USB cables are seldom longer than 10 feet.  Requires a repeater.  Twisting unshielded wire helps a little.  Insulation and shielding is required for longer runs.  Eddy currents: as you increase the AC frequency of a signal the charge rides on the outside of the conductor.   DC goes through the center.  RF signals ride on the outside.  Wire shielding is normally braided fine wire.  When you only have one wire for transmit and one receive wire you cannot filter the signal noise.  Max 232 chip will boost voltage of signal to 15+ 15- so that there is a significant difference between signal voltage and interference voltage so that it can be effectively filtered later.  Uses DB9 connector.  Up to 300 feet transmission.  Recommend belden 8451 shielded cable.

Cat six cable, ethernet cable,  twisted wires that switch up their winding to reduce interference.  Good for runs of a 1000 feet with good data transmission.  100 Megabits per second.

For higher data rates and distances you have to use fiberoptic.  Fiber Optic Cables are doped with phosphors that propagate the transmission.  Fiber can be pumped with high amounts of light energy (usually IR).

DMX 512 theatrical lighting standard.  Arduino has a library to handle the protocol.

Doing research is the first step to doing any electronics project.

Under Bloomberg NY used to be a testbed for urban planning and problem solving.  Once Bloomberg left office it was privatized as Bloomberg Associates. 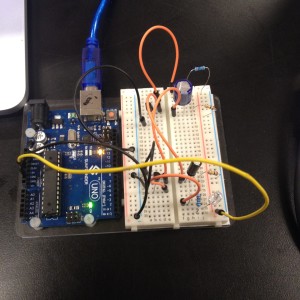 555 Timing chip controlling a stepper motor with current modulation.  Speed of rotation is controlled by the potentiometer. 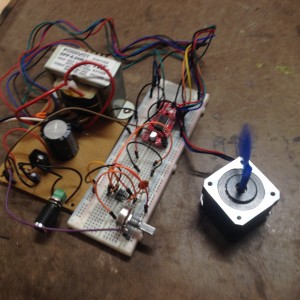 Heterodyne radio signal processing allows RF signals to be converted to sound waves that we can hear. It looks at the difference between two compared signals.

Germanium diodes have much less loss than silicon diodes.

Two function generators are combined to get the sum and difference, we hear the difference.  This is how your cell phone can get sound from a gigahertz signal.  It is reduced down three times to get rid of noise and make the signal audible.

Same technique can be used on light for optical

Differential amplifier, two mics, one for voice, one for outside noise, the difference (ambient noise) is taken out.

Quartz crystals can be machined to a precise size so that they have a specific resonant frequency.  Application of electrical power causes the quartz to physically vibrate at a specific frequency.  Very narrow, very specific.

Sensors that you don’t know are sensors.  Hall effect sensors; transistors sensitive to magnetic fields.  Analog hall effect sensor measures magnetic field strength.  Digital hall effect sensor flips on and off.  Knowing what sensors are available gives you options to problem solve.  Flux gate compass, used for cars, determines direction but requires calibration.  Motors can be used to turn kinetic motion into a voltage.  Some electrical equipment is sensitive to magnetic fields and must be shielded using materials like mu-metal.  Submarines are demagnetized before going out on missions.  Analog television screens and analog television cameras became unwieldy at larger sizes.  LCD displays can only be done in large precision factories.

Phosphorescent strips in american currency made by a single company in RI.  Also used by Disney to sort it’s laundry.

Diodes in anti-theft tags burned out by devices at 800mhz.

Piezoelectric crystal materials that can create frequencies from kinetic energy and vice versa.  Crystals can act like speakers.

All electronics change performance slightly as temperature changes.  You can use a diode as a temperature sensor.

“Moving parts tend to wear out.”

Britton Chance, research into blood flow in the brain as detected by arrays of infrared detectors.

Rotary and linear shaft encoder uses photosensor to encode position for angle of rotation or position along a shaft.  Uses small holes or differences in reflectivity to determine discrete positions without moving parts.

Interlaced tv broadcast due to limitation of vacuum tubes and other technologies at the time.  27 vacuume tubes in a tv for color tv.  RCA system of adding color by adding subcarriers and pixel locations.

Humans use higher frequency sounds to determine time of arrival which allows for perception of sound source location.  Most audio technology today is not optimized for human perception.  When analog sound is digitized and played back there is data loss.  When dealing with audio, changes in the sine wave of any kind is considered distortion, measured in percentage.  Distortion of more than 1% is something people can detect.

When designing an amplifier reduce noise by adjusting gain so that it is not amplified along with the desired signal.  Signal to noise ratio should be high.  More signal, less noise. 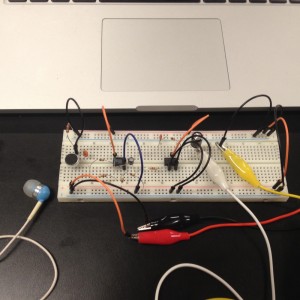 Amplitude Modulation:  A carrier wave of certain frequency has its amplitude changed by the signal wave.

Frequency Modulation: A carrier wave of a certain frequency has its frequency changed by the signal wave.

The signal wave is typically generated from a soundwave (music, talking, etc.)

Squelch: dampens signals below a certain power to filter out noise.

Define the size of the coil and the size of a capacitor on a radio tuner and you will get the resonant frequency of the antenna circuit.  Like a tuning fork or a pipe organ tube.  It creates a band pass filter that selects a certain range of frequencies. 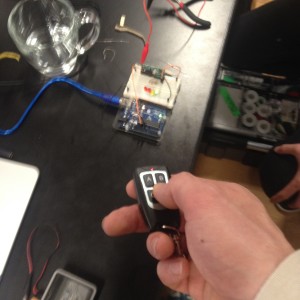 Got this one working but it picks up all kinds of interference from cell phones, radio, etc. 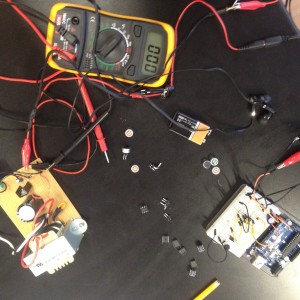 Amplifiers increase voltage or amperage or both with the assistance of an external power supply.  The ohm rating of audio equipment is so you can match the impedance levels, which prevents standing waves

Operational amplifier is a special case; has an (nearly) infinite input impedance on input.  Low impedance on the output.  Very high amperage.  It really amplifies current.

Digital amplifier has a spike in output amplification.

Two inputs, one on the plus sign (inverting), and negative (non-inverting) so you can go one for one or invert the signal.

Almost infinite gain, which can produce huge feedback, unless engineered to compensate.

Open loop mode operational amplifier can amplify quite a lot, but you will lose some power in the process.

Amplifiers can be “cascaded” put into series so that you can amplify a very small signal into a large signal without frequency bandwidth losses.

As you set the gain you can lose bandwidth. 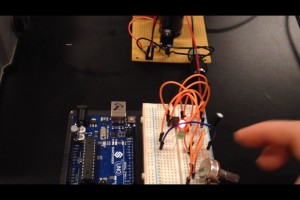 One of the first adjustable timing circuits was for windshield wipers.  Time delay circuits were originally fixed in time.

Transistors revolutionized electronics, most integrated circuits are a combination of transistors and resistors.  Transistors are like adjustable valves, with a change in input voltage, the amount of electricity flowing through changes.

LM555 Timer Chip is based on the design for the original windshield wiper circuit.  Incredibly stable, popular, and reliable.

The LM555 Timer Chip is timed by the type of resistor(s) used with it.

Notch or dot marks top of a chip, pins count counterclockwise from pin # 1 at top left. 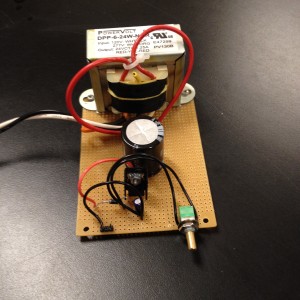 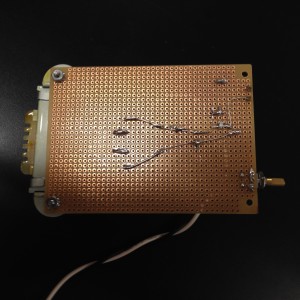 Vents hydrogen which can build up and explode.

The hydrogen and oxygen produced by are recombined into water

If any water or water vapor gets in it explodes and burns uncontrollably.  Don’t use any that are puffy.  Some have onboard chipsets that regulate the incoming power so that it shut down before it shorts.

Can be used to detect the invisible timing, amplitude, frequency etc. of electrical flow through circuits.
Analog pulses have to be less than 90 nanoseconds to be recognized as pulses by some digital circuits.
All waves are sine waves, square and triangular signals are created by combining sine waves.

Tin your new soldering tip to prevent oxidation.  Add fresh solder to a part to remove a part to get the heat to flow to release the joint.  Youtube > beginning to solder.

Electrons flow from negative to positive.  However the convention is to say that they flow from positive to negative.  Electrons can only flow if the circuit is complete.

Voltage is the “pressure” of the flow of electrons.  It is present even if the circuit is incomplete.  Also called the Electro Motor Force.

When you have both current and voltage you can do work.  You must have booth to do work.

When you connect things in series the voltage is divided and the current stays the same.

When you connect things in parallel the voltage remains the same and the current divides.

When using a resistor in series the amperage of the circuit is limited by the resistor for the whole circuit.  Location of the components does not matter, the resistance across the entire circuit is constant.

For components in parallel the currents add up but the voltage remains the same.

When you connect in series the current remains the same and voltage divides.

When you connect in parallel the voltage remains the same and the current divides.

Resistance to the flow of electricity is measured in Ohms, K Ohms, M Ohms.  Resistors are additive in series.

Resistors of the same value in series are divided by their total number and then divided by two.  Resistors are not exact.  Most have around a 5-10 percent tolerance.  A potentiometer is a variable resistor.

Conductors are generally metals.  When

In circuit diagrams any ground symbol is assumed to connect with all other grounds in the circuit.

If you have two known values out of Resistance, Voltage, and Current you can calculate the remaining one.

When using a voltmeter start at a high voltage setting and work your way down.

Capacitors can hold a charge.  It collects electrons on an enormously large internal surface area. Charge is measured in farads. Important to get the connections (esp if polarized) correct otherwise it will EXPLODE.  They will charge and discharge forever if the range is correct.  Capacitors can be used to trigger events based on how long it takes to charge them.  Capacitors and resistors can be used as timers.  RC time constant, Resistance Capacitor timing.